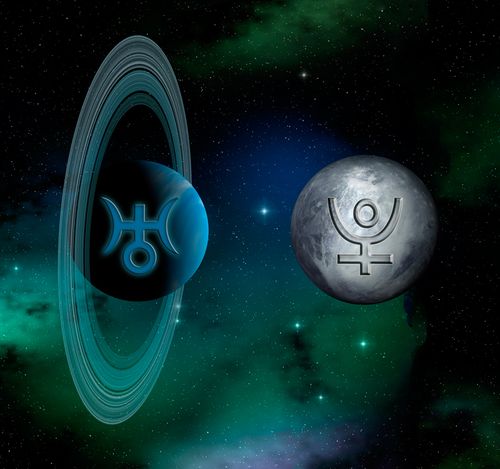 Here’s a bit on the current Uranus/Pluto square that has been in effect since 2008 (using a 10 degree orb of influence) and will be in effect, including what I call the “fall-out” period until 2020 and beyond. On November 1, 2013 the 2 planets will make their 4th of 7 exact squares to each other during that 8 year time period. This seems a good time to highlight what these 2 planets symbolize and how enormous changes have occurred during the years, in history and currently, marked by their connection to each other.

Uranus is in Aries at 9 degrees. Pluto is in Capricorn at 9 degrees. That means there is an exact 90 degree angle between these two planets in the sky right now. This 90 degree distance between 2 planets is known as a square aspect, and creates a dynamic tension between them and what they represent. (Perfect timing for a government shutdown and a stand-off between the right and the left.)

These two planets last came together (in a conjunction – meaning they were 0 degrees apart – sharing space in the sky and operating in tandem) in the 1960’s and we experienced dramatic social, political, technological, economic and personal changes across the world:

The Soviet’s put the first man in space.

The Beatles storm the music scene and change the music industry forever.

During that presidency Marilyn Monroe is found dead

US Sends Troops to Vietnam – The beginning of the Vietnam War

Mass draft protests in the US

Neil Armstrong is the first man on the moon

Yasser Arafat becomes the leader of the PLO

The time before when Uranus and Pluto came together was in the 1930’s. At that time these two were in a square aspect. Like now, they were 90 degrees apart. During that decade we experienced dramatic social, political, technological, economic and personal changes across the world:

We split the atom

Social Security is enacted in the US

Broadcast of the “War of the Worlds” creates havoc

First commercial flight over the Atlantic

So – it seems worthwhile to look at the meanings of these two planets as they square each other in our own time.

Just below is info on Uranus and Pluto separately and together – very interesting!

What feelings come up for you when you read these keywords of Uranus?

One of my very favorite astrologers, who is so much more than that – he’s one of the most profound thinkers of our time and a prolific writer, professor and speaker – Richard Tarnas, wrote a book about Uranus called Prometheus The Awakener. In this book he compares the meaning of Uranus to the mythological figure Prometheus , who was rebellious enough and nervy enough to steal fire from the Gods and give it to humans to accelerate their evolution and break the hold that the Gods had over them. In this book he describes Uranus like this:

“Uranus is empirically associated with the principle of change, rebellion, freedom, liberation, reform and revolution, and the unexpected breakup of structures; with excitement, sudden surprises, lightning-like flashes of insight, revelations and awakenings; and with intellectual brilliance, invention, creativity, originality, and individualism. In addition to the occurrence of sudden breakthroughs and liberating events, Uranus transits are linked to unpredictable and disruptive changes, and thus the planet is often referred to as the “cosmic trickster.” In terms of personal character, Uranus is regarded as signifying the individualist, the genius, and the rebel.”

When I think of pure Uranus energy, the first person that comes to mind is Albert Einstein.

What feelings come up for you when you read these keywords of Pluto?

Archetypally speaking, Pluto represents the necessity of descending to the depths before you can ascend to the heights. It is the story of the phoenix – who out of hubris flew too close to the Sun and fell burned to the Earth – but! He then transformed his own ashes into a better, stronger version of himself and was able to ascend – to fly again – perfected.

Pluto also represents alchemy – the process of changing the base matter (lead) into the purified gold.

Pluto points to karma and to the needs of the Soul – our desire to learn the lessons in our lifetime that will purify us and evolve us – getting us closer to God.

Pluto will most often, when transiting our birthchart at a sensitive point or personal planet, take us down into darkness of some kind, where we undergo challenges necessary to purify us in some way, and then we come back into the light to continue our transformation.

An example of this process is in the story of Persephone in Greek Mythology. Pluto (or Hades in the Greek) decided that he wanted the young innocent daughter of Gaia, The Earth Mother for his own. So he abducted her, dragged her into the underworld, and did unspeakable things to her. Yet – over time – Persephone was transformed into a queen in her own right. Via this traumatic experience, the innocent maiden was transformed into a woman and queen, and later spent half of her time on Earth with her Mother and half of her time in the Underworld with Pluto.

One of the most poignant examples of this Pluto energy is the crucifixion of Christ (and other mythological characters whose stories are very similar) The story very literally describes the Pluto process: crucified, dead, and buried. The 3rd day he arose from the dead and ascended into heaven to sit at the right hand of God the Father Almighty – perfected and purified.

Meaning of Uranus & Pluto Together

So, 3 songs I think of when I think about Uranus and Pluto dancing in the sky together are:

1. Revolution by The Beatles – written during a Uranus/Pluto conjunction in the 1960’s

2. The Times They Are A’Changing  by Bob Dylan – written during a Uranus/Pluto conjunction in the 1960’s

3. It’s the End of the World As We Know It (And I Feel Fine) by REM – written during a Saturn/Uranus conjunction in 1987 (definitely different but similar)

Here’s something helpful from another of my favorite books.

According to Banzhaf and Haebler in the book Key Words for Astrology:

Uranus and Pluto Together = Metamorphosis

Archetype: The Rebel and the Powerful Person

(An archetype, one of the primary ideologies in the psychological teachings of Carl Jung, is a primordial or purely inherent and instinctive form in the psyches of all people, no matter where they are or what culture they are from. Archetypes cross cultural boundaries and are experienced as similar instructive forces by all people, everywhere. These shared archetypes, these shared forms in the psyche, impel human behavior and experience. They are expressions of a Collective Unconscious shared by all human beings. Examples of archetypes are The Great Mother, The Absent Father, The Golden Child, The Seductress, The Hero, The Underdog, The Mysterious Stranger – etc. etc. etc.)

So let me say that one again…

Archetype of Uranus and Pluto together: The Rebel and the Powerful Person

Shadow: The Eccentric and the Power of Darkness

In Discord: The Despot. Willful, irresponsible misuse of power for questionable, eccentric goals. Extreme inner tension and vacillations between highest heights and deepest depths, between total freedom and complete constraint.”

We can see then, from the words of these folks that the effects of Uranus and Pluto coming together has to be far reaching and life changing. And we are meant to change personally as a result. We are meant to awaken to our ability as a society to change the deeply rooted, dark and subjugating powers that be, bring them to light, demand freedom from them and then transform to the new way of being.

The Uranus/Pluto Square has seven dates when the two planets are exactly 90 degrees apart… meaning that the effects of the square are the strongest at these times.

The Seven Epic Squares between Uranus and Pluto – 2012 through 2015

After that last date, the two planets are still what we call “in orb” meaning that they are close enough to the exact square that the effects are in play through 2016/2018 and perhaps beyond.  I’m sure that when future generations look back on the historic changes in our time, they will catch their breath at the intensity and profound changes that occurred – just as we do when we look back to the 1930’s and the 1960’s. 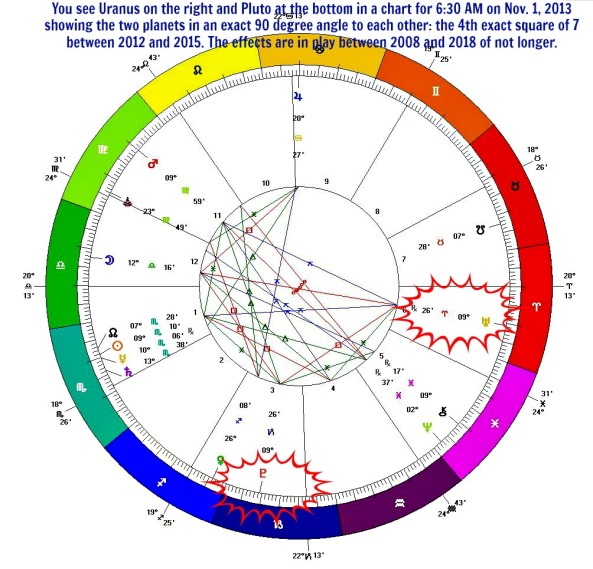